I love a documentary, generally I’m pretty nosey so anything from men living in the desert, marrying lots of women, having a ton of children to get closer to god (seriously Channel 4 where do you find these people) to food documentaries, and everything between. This morning I finally got round to watching What the Health, it is a film made by the same people who made Cowspiracy AKA my favourite documentary and the reason I really stick to a vegan lifestyle. Yet again, I am blown away with reasons why more people should be considering a plant based diet, I’m a big, fat environmental vegan who has seen the health benefits personally and now cries at the through at animals being slaughtered for food when we are surrounded by good food that doesn’t involve so much violence. I’m not going to sit here and tell you all to go vegan but here’s a few reasons why you should watch it at least. 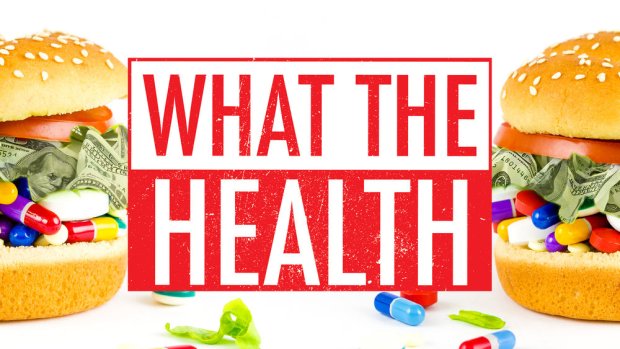 I get that not all of you who read this will be ready to go vegan or even vegetarian but cutting down or cutting out processed meat is important. Ok I’m now going to say something that hurts me to say: a bad diet is WORSE than smoking. There, I’ve said it, it hurts to say because I’d like everyone to stop smoking but looking at some studies highlighted show that theres a higher link between bad foods and cancer/heart disease.

2. Not all diseases are hereditary

You might have a predisposition to things like heart disease but that doesn’t mean that you are destined for that, you can totally avoid it. There are so many studies that show you can reverse some of these diseases! Heart disease, diabetes, asthma, to name just a few, there are studies that show by changing over to a plant based diet can heal the body. If it can heal your body, then surely it can prevent them to start with.

WHAT THE FUCK? I can’t get my head around this, basically toxins are soaked up by everything, it’s getting into plants and animals, but animals eat the plants so are collecting even more toxins. These toxins then sit in the tissues of animals and don’t get removed before you eat them… I’ve never even thought about the pollution affecting the food that we eat… I’m genuinely grossed out.

This is something I’ve been banging on about for years, so many people are lactose intolerant and they don’t realise, I know I didn’t until I cut it out. There are links between eating dairy with acne, acid reflux, eczema and a few more. My personal experience with dabbling with a dairy free diet over the years and now being fully vegan is that my skin cleared from almost all spots, my face was less blotchy and my eczema completely disappeared, it’s hard to convince myself that these aren’t linked to dairy now. Milk is also full of hormones, which just plain makes me uncomfortable and What the Health shines al light on how it’s not even protecting your bones…

5. Health isn’t just about you

This point is very links to America but we are never far behind them. Pollution from animal farming is real, it’s big, I find it very hard to take people who are about the environment that seriously when they still support an industry that is ruining the planet. I know that sounds like a mean thing to say but that was me for so many years, I love planet, I always thought I was doing well by it until I watched Cowspiracy and it turned everything I believed on it’s head. What the Health touches on the environmental issues with animal farming and shows just how much of an affect it’s having.

6. Organisations are sponsored by companies

I’m aware that this makes me look a little bit like a conspiracy theory nut but you just can’t trust everything that health organisations say. If you dig a little further in you might find that they are sponsored by the very companies that providing the public with these awful food. Basically what it boils down to is money, not the health of people, this makes genuinely makes me cry, a lot.

7. The cure is considered more important that prevention

Medication is a big business, it makes me really upset to watch so many people who are taking one pill to control one ailment, but that causes something else so you get another pill, then another will stop you from getting a stroke, oh and you’ll be on them forever. FOREVER? No, get to fuck mate. Guess who else sponsors health organisations? Bingo, pharmaceutical companies. Prevention should always be what we’re aiming for and I will never understand people who will resign themselves to pop pills that simply treat symptoms rather than try to come off the medication. This goes back to point 3, plant based diets can REVERSE some of these diseases.

8. But what about protein though bro?

Animal protein comes from plants. Grains, beans, vegetables are packed full of protein and really, the strongest animals are vegan (ok herbivores). What you maybe need think about it where you’re getting your fibre from hen.

Great. American doctors only get 7 hours of nutrition training. Now I don’t know what the deal is over here but come on. My experience with doctors is they’ll throw pills at you instead of talking about diet… And people wonder why I barely go to the doctor. On that note, my asthma is almost gone and I’ve suffered from a record low of 3 days of hay fever symptoms. Now I’m really not claiming that this is definitely from being completely plant based but it’s a funny coincidence right?

Rich Roll is inspiring, he did 5 iron man challenges in 5 days – he is vegan, he’s an ultra-endurance athlete and he is 50… Timothy Shieff declared that he didn’t want his gains to come at the expense of others. Vegans are not all weak, we are healthy, we are strong.

Basically, watch it, it’s on Netflix or you can stream it. Even if you have no intention of going vegan. I think it’s really important to be informed on what life you’re choosing to live. Take control of your life, be kind to yourself and the planet.

8 thoughts on “LISTS: 10 reasons to watch What the Health”