It’s that time of year again, Christmas is here and it’s time to eat! This is my first Christmas as a vegan and we all know how stressful I find eating out! I’ve been fortunate enough to get 3 Christmas at work and they were all so different, so here goes.

The first Christmas dinner was my work Christmas party, it was at the Principal in Edinburgh, I won’t lie I had high expectations. We were all asked to give our dietary requirements in advance so that the venue had time to prep something suitable which to me always seems like a good plan for some great food!

Ok so I didn’t get a photograph of this because we were all too busy pulling crackers and posing for snapchats.

The starter I was given was a pretty standard soup, carrot and coriander and it was pretty damn good! It’s hard to go wrong with soup, it was also the soup that everyone else was eating which made me feel like I was actually part of the group, while I don’t mind being one the dietary requirements list for food (I secretly like a little bit of special treatment), I do love to feel like I’m eating the same as other people.

The main however, I don’t even know what it was. It was a tomato sauce over some vegetables, cauliflower, carrots, sprouts, some chestnuts and pumpkin seeds. In theory that would be an ok dinner but this was pretty awful, I’m not fussy with my food but this tasted weird.  Generally the veg were fine but the sprouts tasted strangely bitter and the sauce was incredibly bland. I was very disappointed with this dinner, it wasn’t Christmassy and more importantly it wasn’t very tasty, I hate food waste but I couldn’t finish this at all. For somewhere who had my dietary requirements weeks in advance, I way incredibly disappointed and hungry.

This was easily the best course, you can’t go wrong with sorbet! Mango and raspberry sorbet was exactly what you’d expect, sweet and delightful. 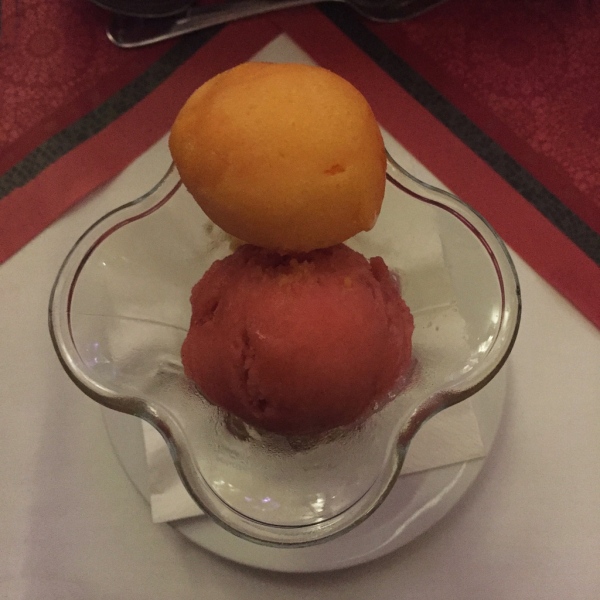 Ok so I had weirdly high hopes for this one, the second lot of Christmas food was in the canteen at work admittedly, not where most people would expect a good vegan meal. I’d already been through to speak to them about opting out of it’s easier than them creating a gluten free, vegan meal. But, they were already on it, they were sorting recipes a couple of weeks in advance – adorable!

A REAL LIFE ROAST! Now this doesn’t looks pretty but when does a plate of roast anything look good? I was overwhelmed with the effort that the canteen had put in, they’d made the vegan but roast gluten free AND they’d made some gravy too, that way I didn’t feel like I was missing out. Finally someone who gets it! Not only was there a ton of effort put into making me something, it was really tasty, I’ve not had a roast dinner since I went vegan at the start of the year and I’ve never had a nut roast but to my surprise, it’s a lot like stuffing – my fave part of a roast anyway!

I wasn’t expecting a desert, they all had enough on their plates but when I arrived to collect my lunch I was given a chocolate pudding too! I honestly nearly cried. So this chocolate pudding was incredibly chocolatey, creamy and rich – it was amazing.

The final Christmas meal was the department lunch at Houston House Hotel in Uphall. After looking at the website it looked like a nice venue, as usual I sent over my dietary requirements and to my surprise I was given a menu over, a nice touch, it’s nice to know what I’m going in to!

Off to a flying start! Just like at the Principal I had a starter off the menu, the risotto. It was pretty darn good, in fact I’d have really liked a giant bowl of this! Perfect starter.

Now on the menu this was called vegetable barigoule, I have never heard of that in my life but I was pretty positive that if it had a name, it would be a real thing. I’m still 100% unsure of what vegetable barigoule is… turns out warm pickled onions are weird and what I am sure of is that what I was given was half of the salmon dish my friend was scoffing next to me. Now while I do like a good, flavoursome bowl of veg, I did feel a little cheated that I was only getting the side of someone else’s meal. 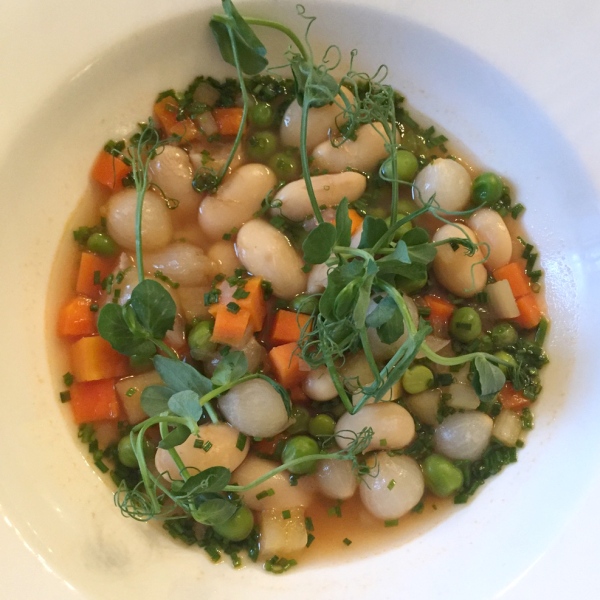 This was right up my street! We all know that I’m obsessed with pineapple and I blooming love grilled pineapple, paired with a mango sorbet it was incredibly tasty. 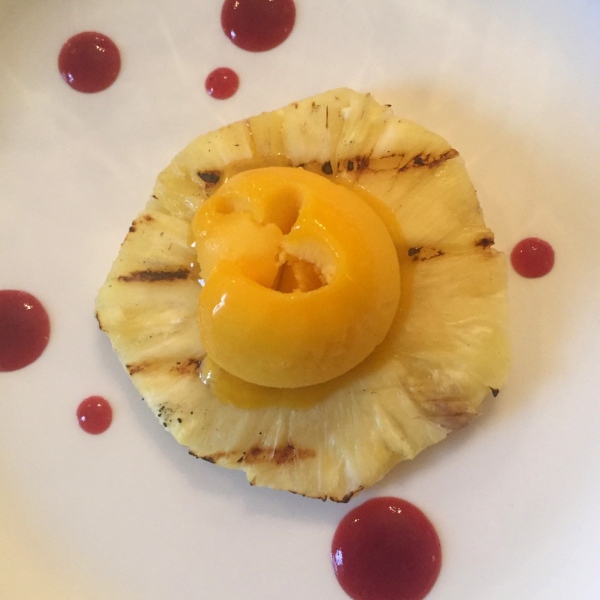 All in all, I’m ridiculously impressed with anyone who can make me a normal Christmas dinner, I blooming love a roast, it’s Christmas after all and Christmas food is the best food in the world.

Can we just?! My heart always bursts 😭🥰💖
LUNCH // does anyone else just throw pasta, pesto and salad together when it’s hot? 😂
SKINCARE // cleansing and toning. I’ve used these 2 products for months now, both from @superdrug and I use them with a flannel, not pads. I think the flannels are just easier to use, all four corners, then the middle, then the other side boom! Have you tried either of these?